skip to main | skip to sidebar

TLP at The Joysco Convention Center 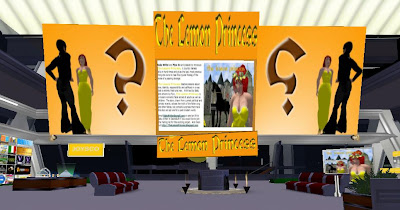 Flyw Jie and I exhibited The Lemon Princess on August 12 at SL's Joysco Convention Center during the reading and discussion with noted comic book author Greyfox Book (aka Jon Klement in real life). We were pleased to be asked to exhibit by Jilly Kidd, and grateful for the set up assistance provided by Johnny Austin! 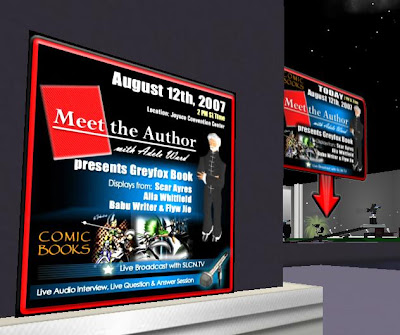 Joysco is a spacious, airy venue and we look forward to exhibiting there again during notable literary events.
Posted by Babu Writer at 8:20 AM 2 comments: 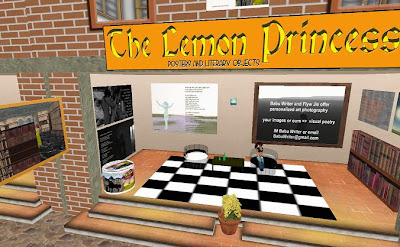 Flyw and I have a new store in SecondLife! It's in the new Book Island. We've moved in. There are lots of new things. Five Poetry posters to start. Today I bought a THiNC Book press and as soon as my chapbook is ready away we go! Meanwhile, we work on the Princess. Look, there's me in the store!
Posted by Babu Writer at 10:23 PM 2 comments: 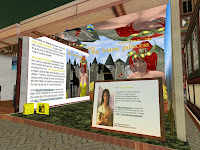 The Book Fair is over and our lease is up. In fact the entire Book Publishing Village is moving to Book Island. I took a couple of pics of our booth before moving out. 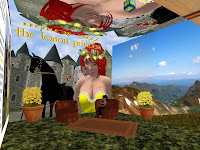 This second one includes one of Flyw's pictures from his visit to the Cantal region of France. What a beautiful image, Flyw. Thanks for putting it up!
So what's next for The Lemon Princess? A RL book proposal. Working on it as we speak.

Here it is:
THE LEMON PRINCESS PROJECT
Uploaded by babu_and_flyw_project
Posted by Babu Writer at 2:42 PM No comments:

What's It All About?

OK, so what's the mystery? A novel about a princess story? That's right. The princess story is written in SecondLife by Babu Writer. When that is done, the real person behind the avatar will stand up and complete the real story of the novel.

The protagonist in the novel is none other than Babu Writer herself, a writer of children's stories. She has written the story of The Lemon Princess for a child, her child. We hear this child's voice, asking questions. Babu answers. The pair has a close relationship. But where is the child? Why do we never see her? Is she a ghost? Did she ever really exist? Is she a figment of the imagination? Why is she haunting Babu? Why does this tale grow increasingly dark, even as the story of The Lemon Princess grows cheerful and bright?

You will have to read the novel to find out.
Posted by Babu Writer at 3:54 PM No comments:

The Lemon Princess booth won $1000L for best booth display at the SL Book Fair, held April 20-22, 2007 at The Book Publishing Village in Wallaby. We're told there was RL press coverage in some trade publications, and there was even a story on BBC4.

As a result of doing well as the Book Fair, on Sunday evening, Babu Writer was invited to read some of her poetry at The Blue Angel, and she did. We think it was well received. It was fun... and well, perhaps there is something serious brewing in that department as well. One can only hope.

Posted by Babu Writer at 5:20 AM No comments:

The Lemon Princess is more than what it appears to be. The core story, "The Lemon Princess," is promoted as though it were a story on its own in SecondLife. Tunnel in, and you will find yourself tunneling out.

Babu and Flyw would love to find a publisher.

Babu Writer is a story writer in SecondLife (SL). In RL she is a lawyer and writer from Baltimore, MD. She has clips and a bio available in a RL blog. Under her real name, she has published fiction and nonfiction in several reputable literary journals and newspapers. She has edited and published online newsletters and a literary review, and is an established legal author for the West Publishing Co.

Flyw Jie (pronounced "Flive Jiye") is the human offspring of a raven god and a woman. When he was a baby, he sprouted wings. He met Babu Writer in SecondLife. In RL he lives in the French commune of Condrieu, situated on the right bank of the Rhône, south of Lyon. He has an eclectic musical taste, and a special affinity to electric blues. He is an avid photographer. He is a fan of The Nikopol Trilogy of Enki Bilal, and of Les Cités Obscures, the imaginary parallel world created by the Belgian comics team François Schuiten and Benoît Peeters. He is disappointed in Michel Houellebecq. He has not yet read Orhan Pamuk's novel, Snow, but plans to do so.

Babu and Flyw were partnered in a SL civil filing on 27 March 2007. They also have a RL partnership agreement. This their first joint creative endeavor. They are acutely aware of their status as fictional characters, and are becoming extremely fed up with the notion that they are merely projections. If they owned a car, it would have a bumper sticker that said, "Question Reality."
Posted by Babu Writer at 5:10 AM No comments: 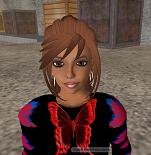 Babu Writer
Hi, I am a writer in real life as well as in SecondLife. As Babu Writer, I have written The Lemon Princess, with illustrations by my partner Flyw Jie. We're excited about this project! I'm also a staff reporter and editor for the SecondLife publication, The AvaStar. Check out my articles there!